Rediscovering the Rapa Nui – a springy little demon on road

Check out this shocking review of the Rapa Nui Tarmac & Trail over at BikerNate. Here’s a guy who sees the value of running in Hoka, but also doubts whether Hoka is the ideal shoe for all his running. He feels that he gets a particular butt and hamstring issue from doing a full long race in the super soft models, but that there’s some sense in throwing on a pair halfway through a 160km run.

Are Hoka for everything for everyone all the time? Is any shoe? Other than the classic Aussie thong of course. We’re fans of runners having a mixed bag of foot weaponry, and it’s exciting to see that as more developments and innovations emerge from Hoka Central, the range of shoe options available from Hoka for different types of runners, with different purposes, from recreational running to ultra-marathon, to obstacle race, 10km, road marathon and back again, is growing in new and exciting ways all the time.

Our own assessment of the Rapa Nui has taken some time to develop. The Trail model, moreso than the Tarmac model, made sense quickly. Running my first trail race last year at The North Face 50km inaugural in a pair of Rapa Nui Trails fresh out of the box just 3 days before, their grip, their responsive handling, their juicy boing made sense. And yes, you’re at the Hoka blog reading The Hoka Guy’s thoughts about a Hoka.

The Rapa Nui Tarmac, though – originally the Kailua Unisex – wasn’t such an immediate hit for me.

Yes it made sense for well conditioned short course triathletes, minimal runners wanting a bit more protection, half-marathoners with plenty of running under their belt. But, personally, having an essentially rectangular foot because I’m quite wide, my toes felt the stiffness in the upper around the forefoot as a result of the double material overlay, where the toeguard ran around the front and top of the toes. So when the seamless bonded upper of the Rapa Nui Tarmac made it to our shores in a size 13.5 I was very happy to find less material, less stiffness, more ability to spread, and a simply much more comfortable and sophisticated upper, better suited to my foot type.

But was it a favoured running shoe? No. 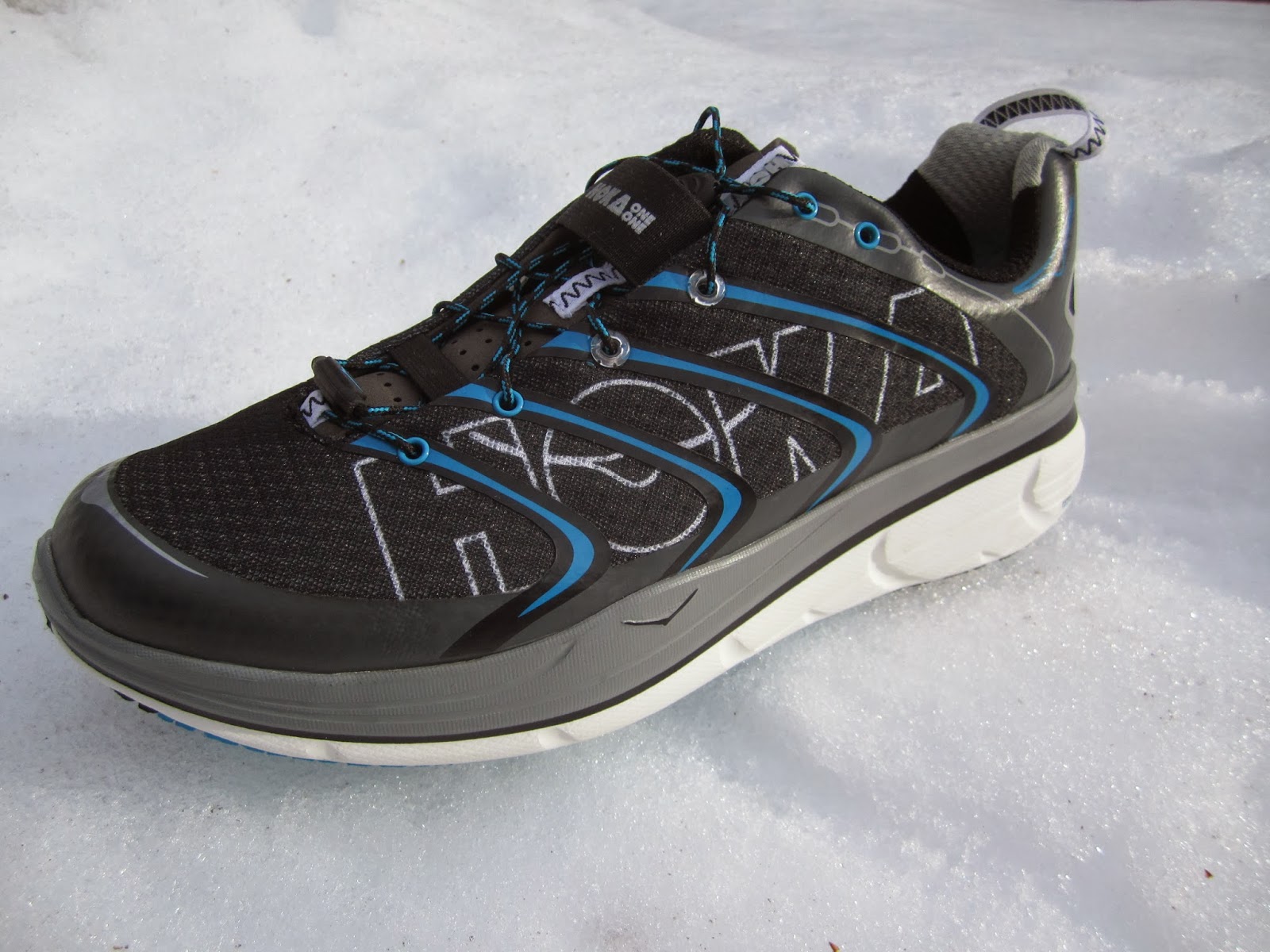 A nice picture of the Rapa Nui Tarmac on snow, as snapped by Biker Nate

As much as I was super impressed last year to hear that Melbourne’s Kerrie Bremner knocked out 215km at the Auckland 24-hour in her Kailua Tarmacs (the equivalent women’s model), I was still using my Rapa Nui Tarmac as a comfortable walking shoe, for day to day wear. Even as some other road runners were clearly enjoying the balancing act of a firmer midsole, with higher rebound than the more typical and super cushioned Hoka models, I was just happy to throw my Bondi or Stinson Tarmac on for road use and cruise along, in all day comfort whether running for one hour or six.

But then last weekend happened.

When I first ran a 100km race, my final heavy session was an 80km weekend, consisting of 4 20km runs within a 36-hour period, about a month out from the event. It left me feeling bashed and sore, but confident that I could suck it up on race day. Fast forward 4 years, and I’m now in the final stage of preparations to race in Japan. By ‘race’ I mean that there will be 99 other runners on the day and we’re all heading for the same finish line. But running 250km on road in a single stage means having many other challenges to overcome before even considering the joyous act of competing with others.

So, as my final heavy weekend, 3 weeks out from race day I once again invoked the 4×20. For my first 3 runs – Friday night, Saturday morning, and Saturday night I tested my different Bondi to make the final choice for my race day shoe. But for the 4th 20km, on Sunday morning, I decided to do something different. When we train for ultra, we do everything we can to suck up hurt and go looking for more. We don’t train for a 100, 160, or 250km run by attempting the same distance in training. Instead we challenge our bodies, we push our limbs and organs to a point of hurt and fatigue that approximates race weekend, and then we run some more. We can’t recreate the hurt of race day, but we can practise for it.

Relevance? Looking at my backseat full of running shoes, I reached for the Rapa Nui Tarmac. Other than a sweet old pair of Brooks Green Silence, it was the least cushioned set of runners in my car. Training on tired legs in firmer shoes with less cushioning after a tough weekend seemed the most interesting option, given that I know I can run 20km happily in a pair of Bondi no matter how sore I might be. Well, maybe not happily – but I can definitely get it done as needed.

Result? Wow! Having softened them up a bit from maybe 150-200km of wear, I finally seemed to have found my Rapa Nui Tarmacs’ sweet spot. Despite a hypo from running unexpectedly quick (did I mention it was also a weekend of bonk training?) and a crappy patch of feeling totally dehydrated (can’t blame the shoes for that – probably shouldn’t have skipped breakfast though), all my quickest km for the weekend came in the final set of 20km, on the Rapas.

Firmer sole, quicker turnover, greater spring, superior running form, fully utilized Achilles potential? Not sure. Certainly I wouldn’t recommend running 24 hours in them to anybody but a well-conditioned endurance athlete with strong and light running form. But even after having close to a year’s experience with the Kailua/ Rapa Nui midsole, this degree of performance and comfort from a shoe that I had previously liked but not expected too much from now makes me wonder what else the Rapa Nui has to offer on road as they break in and we get to know each other. The guys behind Hoka are wizards of design and material technologies, and when you find that a running shoe breaks in like this, revealing so much more of itself as it is worn more – it makes you even more curious just what comes next.